My Family's Connection to New Orleans 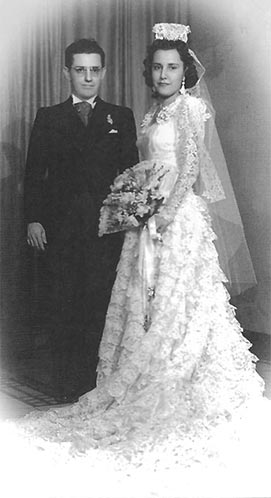 My grandfather, Dr. Miguel Charlaix, was born in 1918 in El Salvador in a city in the east of the country called San Miguel. After years of schooling he graduated with a doctorate in pharmaceutical chemistry in 1941, and then became a visionary and entrepreneur. He married my grandmother, Marina Stella Contreras, in 1944 and had 3 daughters and 1 son. During the 1954 carnival season, him and his family visited New Orleans to bring one of their sons for a medical procedure at Ochsner. He was mesmerized by how the city came together to celebrate. In 1959 he was elected governor of San Miguel, and that same year, he championed the creation of el Carnaval de San Miguel inspired by what he saw in New Orleans. El Carnaval de San Miguel takes place in November every year in San Miguel, and commemorates the Virgin of the Peace. Prior to my grandfather becoming governor, the festivities were celebrated in private galas and private centers, and as a result, people who did not belong to these private sectors, or who had a lower economic status, had no way of celebrating and used to climb on the balconies to get a glimpse of the elegance filling their illusions with splendor that they saw but could not touch. My grandmother Marina, who dedicated most of her life to social service and was Dr. Chalraix's muse, could not stand this division. Only after a few months of preparation, the first Carnaval de San Miguel took place November 20, 1959.

Dr. Miguel Charlaix's vision was for the people of San Miguel to come together for one night regardless of economic status. Based on this principle, the official song of the carnaval was born in 1962. The Xuc "San Miguel en Carnaval" was created by Paquito Palaviccini, and summarizes the spirit of what this carnaval means. The chorus goes: "It does not matter if you are poor or rich, young or old, beautiful or ugly, pasty or dark, female or male, tall or short, everything is equal in San Miguel at carnaval".

That same year, San Miguel had the pleasure of welcoming Mr. Victor Schiro, the mayor of New Orleans, to celebrate the carnaval.

The city of San Miguel declared 3 days of duel after the unexpected death of Dr. Miguel Charlaix, who suffered a fatal aerial crash in March of 1966. While he only witnessed the first 7 Carnavales de San Miguel, he was named the father of this celebration during its 50th anniversary. El Carnaval de San Miguel is now celebrated by salvadoreans in cities across the globe including Los Angeles, Washington DC, Houston, and New York.